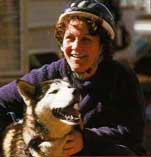 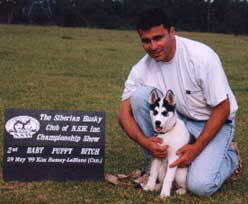 Sibenah began in the mid 90’s with ‘Aleka’, who features above, posing by the ocean at Sydney’s Gordons Bay.

We entered our first eventful race, the SX, with borrowed dogs (Thanks) in 1996. That was it. We were hooked on sled-dog racing but we only had one dog!! Next came Teekoe who in her first season had some initial success in the single class but after several on-trail attacks by other dog/s on trail, lost her confidence.

After a lot of looking around at Siberians in Australia, we took the option of importing. Not that we didn’t adore our first ‘girls’, Aleka and Teekoe, but we were looking for something else. There wasn’t a lot on the web at the time so our research involved lots of letter writing and phone calls around the world. We were interested in lines that had proven their working capability. We even narrowed it down to a certain group of dogs. Fortunately an opportunity arose that was too good to pass up.

It was a long and arduous process bringing dogs in from Alaska, especially for those doing the paperwork and vet visits at the other end (Thankyou). Tserko and Molinka were out of an Anadyr line bitch bred by Orlene Bond (Ormars Cairn of Ramro) and a dog from Earl and Natalie Norris (Alaskans Blackjack of Anadyr).

They arrived into Sydney via Los Angeles in May 1998 and had a stay in quarantine of several months before coming home with us.

Not only were Tserko and Molinka beautiful in temperament and appearance, with the pedigree we desired, but they had the added advantage of already being trained sled-dogs. They lived in Fairbanks and raced qualifiers for the Yukon Quest which they ran in 1996. Their driver, Henri Hahn was very ill and passed away from cancer in 1997.

Sibenah is now pursuing a long term plan based on our imports and involving more Siberians from quality working lines. We hip and eye test before breeding.  Puppies are harness trained and older dogs are sometimes available.

In the past 3 years since we launched this site, there have been a range of developments including 2 more imports from Alaska, and some wonderful mushing adventures both here and overseas.  Unfortunately we also suffered some losses.  Please see our other pages for details of the updates.

Sibenah is now based in Canberra.

We are a recognised breeder and member with the following clubs and organisations: